I’d like to think I have a universal face. That’s probably the reason why people tend to speak to me in their mother tongue at first meet. I’ve been mistaken for a Filipino, Thai, even Vietnamese, but I seldom get people speaking to me in Chinese, which actually makes up half of what I am.

As a result, what’s supposed to be just a transactional conversation often turns into a tactical decision. Should I continue speaking to them in Malay, or do I reply in Chinese and risk a follow-up conversation that I don’t have the energy for?

“Wow, you speak Chinese!” they’d often say. “I couldn’t tell! Are you Chindian?”

Laying low is the equally painful option, because you can practically see the words popping up in their minds, getting caught halfway between their brain and mouth, and coming out as a blend of broken Malay and silent caution. There’s pork in these noodles, their eyes seem to say, you know that, right?

Strangers in the night

This is probably why the two guys I passed on my run the other day spoke so openly about me in Chinese. It was six in the morning and the condensation was beading off the cans of beers in their hands.

“Check this guy out,” one of them said in Cantonese. “He’s already up exercising, and we’re still here.”

I listened to this dialogue with a small serving of nostalgia. It wasn’t that long ago that I’d said the same thing, and I’d like to think I’ve grown a lot since then. My life couldn’t be any more different than my younger self’s, than these two guys’, I was sure of it.

I used to live for the party. Photo: Karina

Back to my childhood

Let’s rewind to a similar morning, about twenty years back, during my rebellious teenage days. It was one of the many mornings where my friend Tim and I would stagger home after a night out in our neighbourhood discotheque.

After sneaking out at midnight and getting shitfaced, we were going to sneak back home, change into our uniforms, and head back out to school. It wasn’t uncommon to spend the days sleeping in class and bragging about who was more drunk the night before.

With free disco entrance thanks to a friend who’d order jugs but never drink them (he had his preferred way of getting high) we kept this up for as long as he went, perched at the tables like stone vultures, slowly sipping away at our alcoholic windfall.

This particular morning, during our usual walk home, we came across an elderly jogger at the field with her headband on, making her rounds in the dark.

“Can you imagine jogging right now?” Tim asked, pointing at the woman.

“Here we are,” Tim said, “just finishing our night out, when people are already starting their day. Just look at those old people doing tai chi.” A brief silence punctuated our tipsy reflections, then: “Do you think we’ll be like that someday?”

I took the last drag of my cigarette and stomped it into the ground. “Never.”

Yet, there I was, running, with the two men now fading into my past. Running in the morning was a new habit that Tim and I had established a few months back, before I moved to the other side of town. Now I do it on my own.

There was no precursor to this. No announcement, no fanfare. One day we just started running at six every other morning, rain or shine. Why? We still don’t know.

All it took was a half-drunk suggestion, and two days later, we were lacing our shoes, ready to head out for what would be the weirdest way we’ve ever started doing something.

How had the tables turned so? It seemed like just yesterday that the sunrise meant bedtime. Now it signified the one more lap I had to run.

Looking back, I’m pretty happy with how things have turned out. I mean, I could’ve turned out way worse, all things considered. I have very few vices besides the occasional tipple, and a fun night out to me involves a cup of hot chocolate and people-watching in Starbucks.

And I’ve picked up running. I don’t know why, but I did. I like to joke that it’s because I want to literally run away from my problems, instead of just doing it figuratively. Lately, however, I’ve begun to realise that perhaps it’s truer than I had hoped it to be. 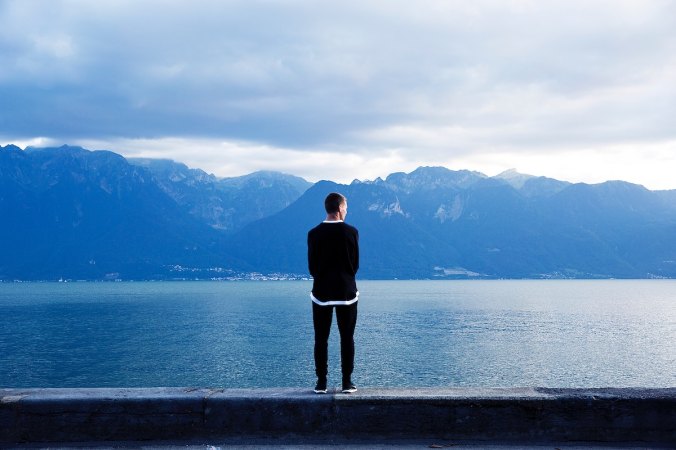 Sometimes all I can do is wonder. Photo: Joshua Earle

I think I do it to run away from my demons. I don’t know what it is, but every time I come home after a long session, I feel as though I’ve put on a warm hoodie that keeps them at bay for just another day.

Maybe it wasn’t the rebelliousness that sent me out to the nightclubs when I was barely sixteen. Maybe I didn’t drop out of school because I was lazy. Maybe those idle teen years I’d spent hiding in my bedroom wasn’t just a phase.

Perhaps I was just trying to deal with the monsters, ones I didn’t know I had. I’m still not too sure if they even exist, to be honest. I can’t even describe how it feels to be overrun by them, so I can’t even be sure if it’s just me.

As it stands, having a normal day is more than I can wish for, and no matter how well I do, I wake up the next day expecting to go to battle once again. I’ll don’t know if I’ll ever win, but I stay ready, just in case. I run, I laugh, I drink, I write, I do whatever it takes so that when the bad days come, I know I’ll have something good to come back to.

I made my final lap and passed the two men again.

“I think we really should go home now,” one of them said.

“Yeah, we should. Here’s to a better tomorrow.”

My day couldn’t start off more differently theirs, but in the end, we’re all just the same, always hoping we’re one step ahead of our very own demons.