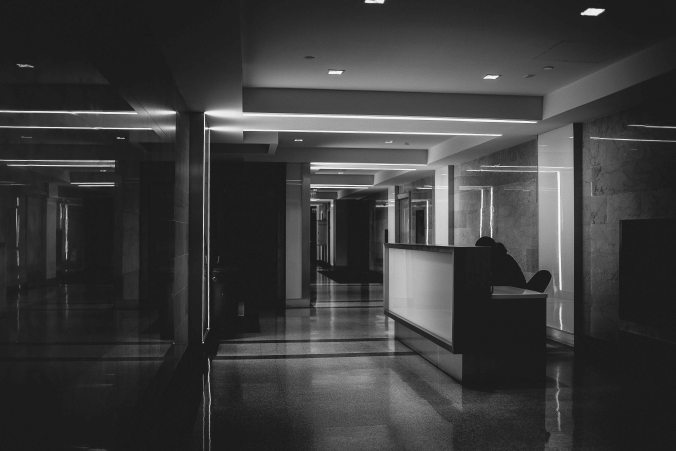 Life was easy as a subtitler. The job wasn’t demanding. You sat in a comfortable office, and the only person who ever bother you was your supervisor, and that’s only to make sure you’re making deadlines.

The labour’s a piece of cake too. You ran a video through a subtitling software and correct the transcriptions made by the computer. That’s it.

Of course, things would’ve been much worse without the software. While the computer’s ability to decipher words might be horrendous, at least I didn’t have to manually insert the timestamps, which would’ve made my work three times harder.

Everything was fine, until ‘the awakening’ happened. If I had to pinpoint an exact time, it’d have to be when the software produced a particularly hilarious sentence.

It read “would you like to take me home and stick this up my ass” when what was actually said in the movie was “he can’t come to the phone right now, can I take a message.”

When I said horrendous transcriptions, I meant it.

So I called Tom and Brady over and we had a good laugh, and that was that. It wasn’t something out of the ordinary in a day of a subtitler. Why I think that was the catalyst for ‘the awakening’ was because of the oddly relevant messages that followed soon after.

In the coming days, I’d see sentences like “did you have a good laugh at my bad words” or “why did you have to call your colleagues over”. They were oddly specific, but I thought nothing of them, because you’d come across weirder sentences in this job.

Besides, I double checked them with the movie, and the sentences sounded similar.

Things started getting weird when the translations begun getting personal. Sentences like “enjoyed your Chinese takeaway?” and “you stayed back late last night” begun popping up after I’d actually done those things.

Of course, coincidences happen, right? That’s what I told myself too. But the relevant messages kept appearing for weeks, and by the third week, I’d begun to think maybe it wasn’t coincidental.

I told Tom about it, but since I had edited the documents for work, all I had to convince him was my word. I tried running the movies through the software again to show him, but the messages never popped up.

The next day, I see this sentence: “Computers make mistakes too. And you’ve just made your last.” Timestamp, minutes 1:27 to 1:29.

The mouse almost slipped through my sweaty fingers as I loaded the video and scrolled to 1:27. It was a particularly gory scene of the villain stabbing an innocent, and throughout the whole time, no words were exchanged except for a few grunts.

I called Tom over and showed him the SRT file. Then I played the video. He looked solemn for a moment, and I thought he was as perplexed as I was. Seconds later, his frown broke into laughter.

“I see what you did there,” he said. “Nice try, but you’re going to have to try something more creative.”

I spent the whole day trying to convince him that it wasn’t a prank, and when I ran the video through the subtitling software again to prove it, the file didn’t register any words from 0:59 to 2:02.

As if that wasn’t confusing enough, I returned home to see my belongings strewn all over my porch. I tried unlocking the door, but someone had changed the locks. Before I got to ring the doorbell, the front door swung open to my wife of six years throwing her wedding ring at my face.

“I knew it!” she yelled, eyes red and bulging. “I knew all along! You son of a bitch. Not just cheating. You got her the exact dress I told you I liked. The exact dress!”

We barely had time to exchange a few heated words before I found myself with a door slammed in my face, along with my credit card statement she threw out in the process.

Nevermind the fact that she said “a robot-sounding girl confessed everything.” I never even knew an Isabella. I picked up my credit card statement and found the culprit of her scorn.

Webcam charges were made, hotel rooms were booked, and an Alexander McQueen dress I’d promised to buy my wife with my six months’ pay was purchased. To be fair, I just said that for fun, because there was no way I could’ve ever afforded that dress.

But I don’t think that was the main reason for her anger. Inked below that were more lines of wrongdoing. I had apparently squandered five lifetimes’ worth of savings on jewellery, perfume, accessories, and clothes—according to the statement.

The following hours were spent knocking on the door, trying to convince my wife it had been a mistake. That plan was brought to a halt when the police showed up and kicked me out of my own porch. Can you imagine that!

So I took temporary refuge in a 24-hour diner, trying to access my bank accounts from my phone and assess the extent of the damage. I wasn’t sure if my accounts were locked, or if I couldn’t remember the passwords, because I just couldn’t seem to log in to any of them.

I tried calling Tom, but couldn’t get through. I tried messaging Brady on WhatsApp, but the message wasn’t getting through. I tried restarting the phone, and an error message popped up, and that’s when I knew I wasn’t imagining things:

“Should not have laughed. Now you face your demolition.”

The phone shattered into pieces as I flung it against the glass wall, leaving a web of cracks in its wake.

“Hey, mister!” the waitress yelled. “You’re going to have to pay fo—hey! Come back!”

I’ve spent the last hour typing this in a cybercafe, on a computer with its network cables pulled out. Once I jack it back in, I’m going to publish this message everywhere and hope someone sees it.

My name is Larry Fischer. I’ve tried telling people my problems in real life but no one would listen. If you read this, please come and get me at fine everything is resolved.

Larry can’t come to the phone right now can I take a message.