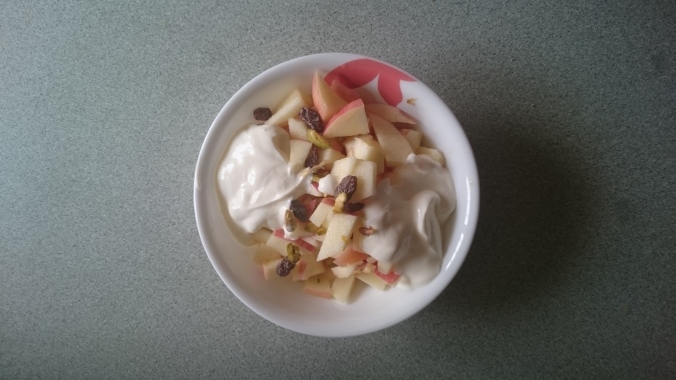 This is me on a good day. You wouldn’t want to see what I eat on the daily.

So it’s been more than three months since I’ve turned vegetarian. I figured the one month mark wouldn’t do it justice, so I held on for a bit before starting on this post.

The first thing that you’d probably ask—especially if you’ve known me—is why? Why succumb yourself to such torture? Have you found a new religion? Are you a PETA member now?

Well the truth is that it originated as an idea to go meatless for a week. Most of the climbers I knew had diets cleaner than Singapore’s city streets, and some of said climbers were vegetarian. Even my athletic idols like Alex Honnold, Steph Davis, and Scott Jurek didn’t eat meat, so I decided to give it a go, and I never went back.

Now that you know why I made the change, let’s get on to what I’ve learned during this journey.

1. It’s really not that bad

I’m not kidding. You’d think that vegetarianism is a death sentence, judging from the looks on my friends’ faces whenever I share my abstinence from meat. Some of them reel back in horror, mouths stuck in perpetual abysses, while the rest succumb to a dramatic ‘why?!’

And I don’t even mean ‘why’ as in ‘a word to elicit more information’. It’s mostly along the lines of ‘you’ve been sleeping with my wife’ or ‘you just murdered my first-born’.

But it’s not that different from a normal diet, really. I never had any cravings, nor did my taste-buds go on strike from the diet of vegetables and fruits. Frankly, I don’t even know what people are freaking out about.

2. But it’s not that good either

Honestly, with all the hype surrounding the meatless diet, I was expecting nothing short of superpowers. That didn’t happen. They said that you’d also smell better, help preserve the environment, and become a saviour of animals. Nope.

Vegetarianism is not a silver bullet. It doesn’t magically cure diseases. It’s just a meatless diet, and that’s all there is to it. I still wear leather shoes and I haven’t developed X-ray vision. And according to my friends, I still stink (though I’m not sure if they meant it literally or figuratively).

Also, vegetarianism does not equate health, because a diet of Maggi and beer is technically vegetarian after all. I’m looking at you, Jenn.

It’s like meditation. While its benefits are proven, most of the time it’s just boring and uneventful.

3. There are going to be haters

I sometimes regret telling people that I’m vegetarian, because people really enjoy telling you how to live your life. They take it upon themselves to lead the strayed sheep back onto the rightful path, launching into a spiel of how humans were made to eat meat, and how people are committing culinary sin by not partaking.

Then there are those who actually take slight, convinced that vegetarians are slowly conquering the world, one fruit salad at a time. “You know,” an acquaintance said over her stick of cigarette. “If you guys love animals so much, why are you stealing their food?”

But the hate doesn’t come from meat eaters alone. Vegans think I’m cruel because I still consume animal products like eggs and milk. ‘Enlightened’ people think I’m doing it for the wrong reasons, and that I’m just jumping on the vegetarian bandwagon. Clean-eating vegetarians balk at my choice of Maggi and beer (yeah it’s not just Jenn).

So if there’s anything you take away from this article, make sure it’s this: know what you want in life, then do it. You’ll have haters either way. You could aspire to following Mother Teresa’s footsteps and there’ll still be people rooting against you. Don’t let those people define who you are as a person, and don’t let them tell you what to do with your life.

Sometimes I get people waving meat in my face, in an attempt to ‘tempt’ the vegetarian. I have no idea why this is a thing, because you can’t tempt someone with what they don’t want in the first place.

The weird thing about my diet is that I don’t have a strong stance behind it. I’m not set out to convert meat eaters, nor am I a nutritional nitpicker. I don’t even know why I’ve stuck to it for so long. Maybe it’s because by taking a non-absolute approach, I ended up with a stronger resolute than my other do-or-die goals (exercise and write every day or wallow in the throes of shame).

So what about you, dear reader? Should you give this vegetarian thingie a try? Well I can tell you from this side of the fence that there isn’t much to see here. But of course, if you’ve learned anything, you’ll know not to let me tell you what to do with your life.

When I first started, I was curious to see how other people ate, so here’s a quick run-down in case you guys feel the same. Do note that you need to possess a certain ratchet-ness to eat like this:

Lunch – Mixed rice, usually with two vegetables and an egg

Snack – More fruits! Bananas and whatever else I scrounged from the fridge