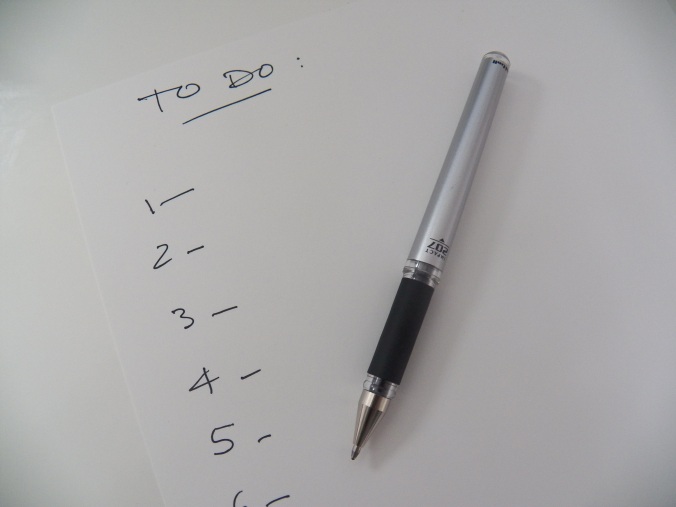 “Having a to-do list is like having a gyroscope to life. There’s a certain magic to committing your goals to paper.”

I’ve liberally paraphrased that saying, but it’s been a while since I was knee-deep in Zig Ziglar, so don’t quote me on that. Some ten years back, I was young and naive, working in a video-game shop, devouring self-help books by the dozens.

“Look around you. It’s a dog eat dog world in the business field… and you’re here reading books? If there’s ever a bigger waste of time, it’s reading books,” he said.

That day was the first day I remembered writing a to-do list.

A few months have passed, and I’ve resigned from my job at the video-game shop. Steph, my hairdresser, was snipping the ends off my hair as I was reading the advertisement posted on the mirror.

“Hey, Steph?” I asked. “How long does it take to become a senior stylist?”

“Hmm… about two years, give or take.”

I was young and impressionable. I didn’t want anything to do with academics, and I thought that signing up for a hairdressing course would’ve made me cool, just like Steph.

I had started feeling disenchanted early into my hairdressing career. As a junior stylist, I was earning a fixed income of USD350 with an average of USD100 commission every month. This was four years in, and I had begun to resent Steph. Was she just shitting me, or was I just terribly untalented as a hairdresser?

I was the first person in Malaysia to earn a distinction in the City & Guilds Hairdressing Diploma, but my day-to-day involved scrubbing the colour off an old lady’s hairline, lest the stains betray her monthly grey hair touch-ups.

All the while, I harboured the desire to see my byline in a newspaper or magazine. I wrote in my free time at the salon, and published my work on a blog.

“Did you read Stuart’s blog?” a colleague would announce. “He wrote this thing… like a story… like a novel! So weird.”

It would be a couple more years before I’d work my way up as a senior stylist, and finally as a salon supervisor. It wasn’t much, but I had long forgone my hairdressing goals at that point.

Sometimes a reader would send me an e-mail, and I’d have no idea how to reply.

“How did you get into the publishing industry?” he’d ask.

My replies would always be succinct, and equally disappointing.

“I applied through Jobstreet, and they accepted.”

I had quit my hairdressing career before thinking about what I’d do next, and to take the piss, I thought I’d apply for a writing gig with my accounting diploma.

“I know my Dickens from my Hemingway,” I wrote in the cover letter, and they called me in for an interview the next week. I got the job, and that would be the first time I had my name printed in the national newspapers, but something still felt a bit off. I still felt like I haven’t deserved it.

Stumped, I thought that something must’ve been missing in my life. I had been able to achieve what I’ve committed to paper so far, but I still felt like I wasn’t anywhere near to cracking the meaning of life. So I wrote down my next target.

Slowly, my goals became inhibited. Ambitious targets like ‘retire at thirty’ or ‘become a professional fighter’ became thwarted by the burdens of age. Things became meaningless. Suddenly, ‘find meaning in life’ became ‘find a passion,’ which dwindled to ‘just get out of bed.’

In the end, I forwent my to-do list altogether, until when I met up with a former colleague, who brought up the glory days of tenure in hairdressing.

“Hey,” he said, “you remember the time we were backstage for Malaysia Fashion Week? Those topless models… man. Have you ever seen that many naked girls since?”

I nodded in agreement, and said, “I was never good in hairdos though.”

“Who cares about hairdos bro? You remember that time you screwed up that bridesmaid’s hairdo in the salon? That was epic!”

“Yeah,” I laughed. “That was a pretty shitty day. But now that I look back at it, it’s pretty funny.”

“Remember that girl that used to stalk you,” he said, “trying to slip you a drink of whiskey every time you cut her hair? Ooh—what about that time when you cut that kid’s ear?”

“Rubbish,” I said, but fun times, I thought.

I wouldn’t say that earning minimum wage was a great time in my life, but it wasn’t exactly a terrible time either. I had met new people, broke out of my comfort zone, and gone through experiences very few other people would have.

Throughout my life, I had set goals, and realised—when I reached them—that they were no longer representative of me. People change, and so do their ideals, and what one sets out to do might not turn out to be the thing they seek in the end.

And that night, after the meeting with my colleague, I returned home to cross out one of the items in my to-do list, not because I’ve forgone seeking meaning in life, but because meaning is in every moment that we live.

And maybe I won’t see it today, maybe I’d hate my life at the moment, but someday, someone’s going to reminiscence, and I’d realise that today was one of the happiest moments in my life, which is exactly why I’ve begun updating my to-do list again.