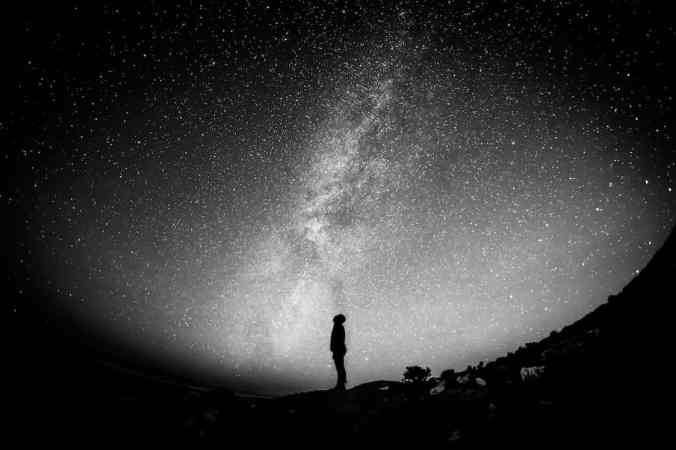 This is an assignment for a writing course, and I figured I’d use it as an excuse to post. Enjoy.

Clara strode through her neighbourhood, street lamps so far apart she spent a bulk of her walk in darkness. Purple clouds blotted the stars, threatening to swallow her whole too.

It wasn’t the best idea, being out at night, but she had to get out of her cramped room; a cramped room that her boyfriend was currently sharing with some skank from God-knows-where. It took all her willpower not to clock him in the head—and that bitch too.

Would I really have done it, though?

Confrontation wasn’t really her strongest suit. She couldn’t understand why. It was something that had always held her back in life. Even buying a fifth of vodka earlier was a chore, what with the cashier spewing lurid remarks while counting her change.

She took another swig of vodka. Just what are you afraid of, Clara?

She could very well take care of herself. She hadn’t needed to test the effectiveness of her brown belt in Jiu-Jitsu, and she was the head of her debate club, so what was it about confrontation that she didn’t like?

People would just dump work on her desk and expect her to do it for them, and her first course of action was always to be amicable—to keep people happy at her expense.

Is this all I’ll ever be in life?

As if in reply, the clouds moved to cover the moon. Even the universe had given up on her.

Suddenly, a shout rose amidst some catcalls. “Hey, woman!”

Clara ignored the voice and fished her jeans for her pocket knife. She wished she had worn her yoga pants, because running in stiff denim wasn’t exactly the best.

“Yeah, you, with the rack and that nice ass! C’mere a minute!”

Footsteps trailed behind her, and Clara tightened her grip around her knife. She didn’t know how near the scumbags were, but she felt someone’s breath on her neck as the culprit whispered: “What’s a sweet little blonde like you doing at—”

She hadn’t wanted to throw him, but muscle memory took over. The asshole had passed out the moment his face crunched against the tarmac. She turned around to see a bewildered pair of eyes staring back at her.

Clara took another swig off her bottle and drew her knife, a sudden rush of violent thoughts racing through her mind. All those years of pent-up anger sent her into a silent rage. She set down her bottle and stared her attacker straight in the eye.

“I’m ready to turn this into a murder scene if you are.”

The other guy slowly backed away, then turned around into a sprint.

And just like that, the clouds began to part, and world seemed to turn just a little brighter for a moment.

One thought on “FICTION: Changing Our Stars”